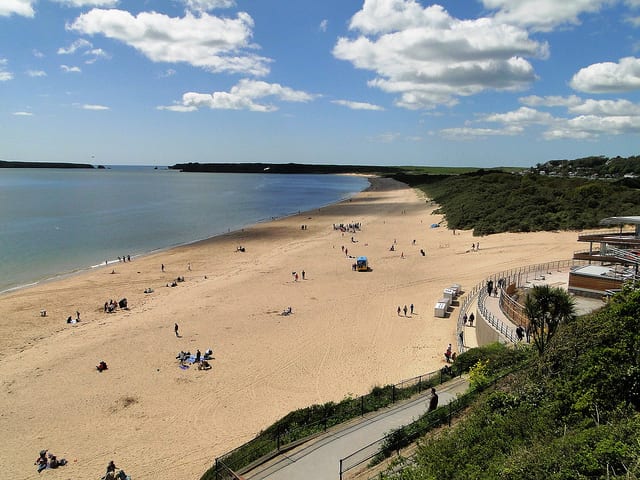 One of the most iconic parts of Tenby is its beaches. So much pride is put into the local beaches that 3 of them actually have Blue Flag Status. South Beach, Castle Beach and North Beach hold the Blue Flag status as of October 2017 and have so for many years now.

South beach is considered by many as the ‘main’ beach of Tenby. Helped in part by it’s large and spacious length. Two miles in total. There is large car park adjoining the beach along with a toilet facility, that offers disabled access.

Recent years have seen some great development here with new apartments and the ‘South Beach Bar & Grill’ opening, offering delicious food and views across the beach.

During the summer, South Beach is watched over by Lifeguards on a daily basis between the hours of 10am – 6pm, ensuring beach-goers and swimmers are safe.

North beach is located in between the Harbour beach and North cliffs. Most people access this location by walking across the harbour wall and carrying on to the promenade. The rock you see in the middle of the beach is know as ‘Goskar Rock.’

Some brave visitors like to climb the rock, despite the danger. Although some people have become stuck and needed to be rescued by the local emergency services.

This beach is also covered by a lifeguard service during the summer between 10am – 6pm.

Being the home of St Catherine’s island, Castle Beach is very popular with people wanting to take a look at the historic fort. The rock face is accessible at low tide but getting on the island itself, is not something that is accessible to the general public.

A boat service also runs from here which sets off on a 20 minute journey to Caldey Island. Most people access this beach from the slipway that is accessible from the top of the harbour. The slipway offers toilet facilities along with a cafe so you can grab a bite to eat.

A lifeguard service operates over the summer between 10am – 6pm

The harbour view of Tenby is one of the most photographed locations in Wales. Nestled in between the harbour wall and sea-facing properties that many people adore, is the small Harbour Beach.

One thing I highly recommend doing, is taking a stroll down to the harbour beach on a calm evening. The harbour has a very distinct feeling and atmosphere at night that most people never experience. The lights of the local properties and the clanking of the ropes on the boats as they sway on the sea, give a sense of well-being that is rarely found elsewhere.

Despite its small size, Harbour beach is also the focal point for a lot of local events such as the Tenby Round Table Summer Spectacular.